Bill, you have a highly overdeveloped sense of your own importance. Is that not a superfluous sentence you’ve just written?

As a vegan, I join with non-such at a restaurant, open the menu and bite my (own) tongue at the overwhelming quantity of non-vegan fare that tastelessly adorns the menu — beef tongue is but one. Hey, why is tongue not among the lurid photographs of dismemberment, decapitation, mutilation and third-degree burns? 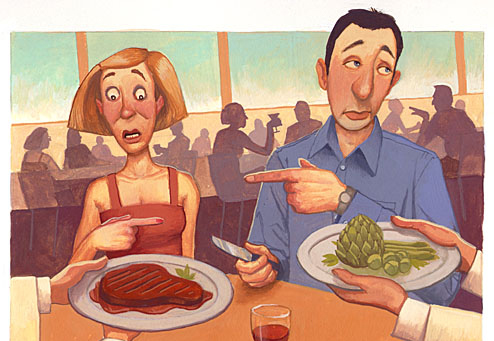 Wonder no more my friend, you do exactly the same thing with produce — dead on arrival at the supermarket.

Tongue bite: What is the difference between cannibalism, eating body parts from a fellow specie, and consumption of any other highly evolved sentient creature? “Meat” cuts come from an animal with a highly developed central nervous system.

It is societally sanctioned. Call it an appetizer, entree, craving, tradition, custom, rite, blessing, a dominion-over thing. We’re talking about a nutritionally healthy and balanced diet. Humans are hard-wired…

You see, it’s OK — those animal remains on our plate did not have four fingers and an opposing thumb, did they? Nor did they have vocal chords that produce words. So it’s OK, OK? It is OK, Bill. By the way, have you ever heard of the Natural Law?

Look here, Bill. We’re getting a little tired of vegans trying to stuff kale down our throats all the time. Do you have any idea what that’s like? Do you? Well let me tell you about the Natural Law. It’s what gives us dominion over all the beasts. Scripture tells us that man has an immortal soul, all other animals have mortal souls.

If that isn’t enough to stop your insane raving, we have saved the very best argument for last, so please, if it’s not asking too much. Might you leave us these two words — CANINE TEETH.

8 thoughts on “Veganism vs. Cannibalism”