Nota bene. Lisa has noted under separate cover that a logical argument based on (anti)Semitism is wrong in every respect since both people share the common patriarch Abraham. In 2016 we’re still talking about his two sons: Ishmael and Isaac, brothers where the branches of the Semitic tree meet. Oz & Nichols.

Today’s question: is it possible to use maps as propaganda (הַסְבָּרָה‎)?

On your next tour of the “Holy Land” bring home souvenir maps that follow guidelines for “Public Diplomacy: Israel.”

An excerpt from a recent Haaretz article describing the brochure below:

“The only Muslim site listed is the Dome of the Rock. It’s clear that the map’s editors took pains to omit the Arabic names of sites in the Old City. For example, it uses the terms “Har Habait,” “Temple Mt.” and “Mt. Moriah” for the Temple Mount area, but omits what most Old City residents call it – Haram al-Sharif, or Al-Aqsa. In fact, the Al-Aqsa Mosque is illustrated but not named; the area east of it is marked as Solomon’s Stables.” 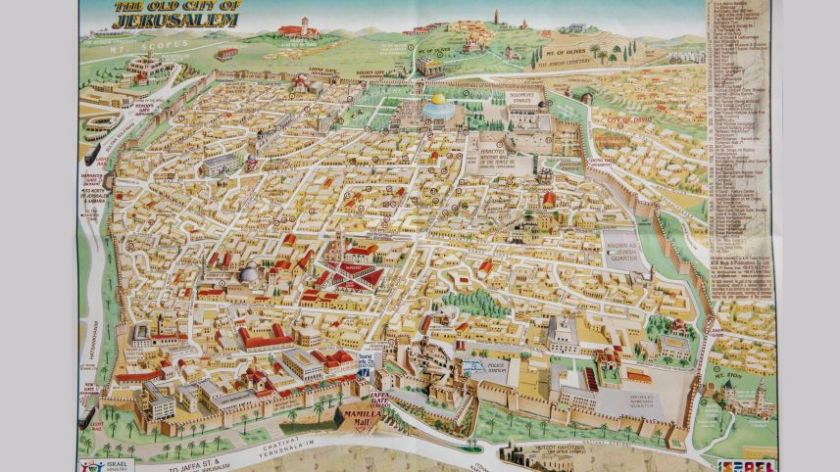 Actually I remember Dr. Laurence G. Wolf once mentioning this topic around 1967 in a geography class at the University of Cincinnati. It was the year of the 1967 War, when Israel occupied the West Bank of the Jordan River, the Gaza Strip, the Sinai Peninsula and Golan Heights. Now in 2016 Israel has only returned the Sinai Peninsula (to Egypt), but no land ever to a single Palestinian: the original residents of Palestine. Before May 14, 1948 most Palestinians lived near the Mediterranean Coast

I haven’t yet found examples for the Czech map mentioned in that class but I do remember that it depicted the Sudetenland as a range of sharp teeth about to champ on a tasty morsel. The German cartographers fashioned maps to represent a clear and present danger: militant Polish horse-powered troops getting ready to thrust their force into 1939 Germany.