Imagine a legal system that recognizes animal rights as inalienable, slaughterhouses closed because they deny life, liberty and the pursuit of happiness.

Imagine a planet made uninhabitable by a singularly rapacious species.

Can the impossible and the near-certain be reconciled?

Why do we never refer to “farmed” animals as cadavers or corpses?

Carcasses get hung by hooks that slide along ceiling rails and transport them into a sequence of production stations. We don’t do such things to human beings because we value life. Where did you go to school anyway, Bill?

By the sixth day, the Bible identifies certain animals as livestock (alive, caged, enslaved, dispatched). Sentient beings with a central nervous system — one that transmits data from brain to spleen — are complex emotional be

ings. Pet “owners” know this, but they also “know” that a meal without meat is an oxymoron.

Apples and oranges, Bill. Pets are lovable family members. Meat is matter that doesn’t matter. Just don’t think about it and we’ll all be better for it. You’re obsessed with animal so-called rights. You need help. I hope you get the help you need. Pets are simply lovable. They are not dead meat. But why do they eat pets in Korea? That’s just wrong.

Apples and oranges are both fruits. Piglets and human children are both mammals.

What you shun enduring yourself, attempt not to impose on others. You shun slavery—beware of enslaving others! If you can endure to do that, one would think you had been once upon a time a slave yourself. For Vice has nothing in common with virtue, nor Freedom with slavery. (41).

— Epictetus “Golden Saying of Epictetus” (as translated by Hastings Crossley)

Then God said, “Let us make mankind in our image, in our likeness, so that they may rule over

Did a God create mankind in his own image or was it the other way around?

Again, who made us the boss of them? Why is an animal killed by homo sapiens called a meat carcass, not a cadaver or a corpse?

Bill, did you know that Mannwich® is a meal? It’s not annimal fodder. 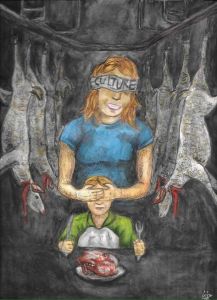 Animals don’t feel pain the way that WE do. Hunters know this. You should try hunting and you’ll know too, Bill

Bill, do you recognize the difference between cannibals and meat-eaters?

Use them, consume them, tan their hides, chew their jerky. Search for even more markets that promise additional markets for each cadaver part, create a demand for a wide range of corpse parts.

“As a meat-eater-to-be, however, this was more of an issue, because I would presumably need to stop caring about animals. How does one stop caring?

The answer to that question in my case was severe depression. I had always been prone to depression, and still am, but as a vegan I finally became so utterly indifferent to my own life that it led to this epiphany of sorts: “If my life doesn’t matter,” I thought, “a cow’s life definitely doesn’t matter.” Eating meat no longer seemed impossible to justify. If it had to be me or the cow… it might as well be the cow.”

Animals do not wish to be husbanded.  They do not enjoy a caged or crated existence. Freedom for me, but not for thee? Gaze into an animal’s eyes and see what those eyes scream back at you. Or don’t.

A male calf cannot produce breast milk. Cow milk is calf nourishment.  A mother cow is a fellow mammal. She produces breast milk for her young in the same way that all mammal mothers do. She wouldn’t seek to divert her breast milk to supermarkets. Veal is a tender flesh that draws ever fewer consumers, and not because it’s illegal. A proxy agent crates them, force-feeds them, kills them, sells them. A product code triggers a beep.

A male chick does not lay eggs. This severely limits his value in a poultry processing facility. It yields marginal protein content and cannot be inventoried. If management doesn’t do something about animals who cannot produce eggs they get stuck with useless inventory. Fortunately, there is customer demand for pet food and school cafeteria fare. Male chicks serve this market. Once you have separated the egg-layers from the useless-as-bull-teat chicks you need to send them down a chute, pump the protein-rich slurry into tankers and truck them to rendering facilities.