No. Each of the 16 ways in German tell you the gender, number and case of the following noun. So just IN CASE…

Having taught the language for decades I’ve found some tricks for avoiding German’s paradigms from hell, that’s what they are — and no mistake. Something they don’t tell you about until it’s too late to drop the class, I am hoping that this post serves as warning. It may be too late for me, but not for thee.

Take a look at the über busy “visual aid” to the right. It’s a genuine P-O-S in my humblest opinion — ein Stück Scheisse, ohne Zweifel.

Mark Twain learned German (Fraktur even!) and lived to warn his readers: The Awful German Language. Fraktur inventors even thought of making the letter ‘f’ nearly indistinguishable from the letter ‘s’. So that you have to recognize the damned words containing ‘f’ and ‘s’ before you can understand what you are reading? Yes.

Consider the first line that the crow below is about to peck. “This is the Leipzig Fraktur font”:

I didn’t begin learning German until becoming an adult, when I needed it to study in West Germany in 1971. Sheer good fortune found me rooming with the only German student in the building who did not speak English…

Before the Vikings invaded Britain, English was still inflected the Saxon (Sachsen) way. The German “chs” became the simplified “x”. They had a land to plunder, so they took the gordian option — replace all the sixteen shades of inflection for the so-called “strong endings”” from der, die, das, den, dem and des to “the” and replace all the twelve shades of inflection for the so-called weak endings” to “the” as well. Knot cut. 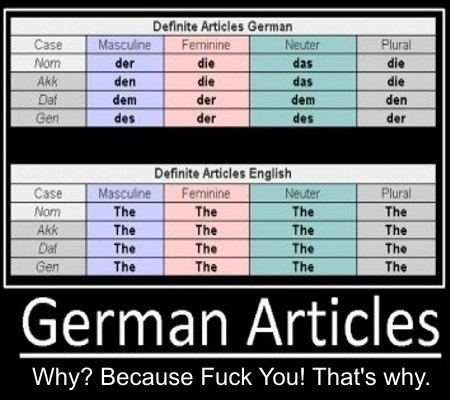 German inflections do not flourish in non-German soil well. Norway, Sweden, Denmark, Netherlands — all of them pretty much did away with the meaning-by-inflection technique and applied the Viking way. Similarly, the Romance languages discarded the five declensions of Latin.

The only country that retained German (Nordic Branch) was Iceland. It has maintained all four cases and three genders for a millenium. Icelandic speakers can, with a bit of effort, read the Eddas. By the way, the Icelandic word for Iceland is Island — Iceland is land, is it not? 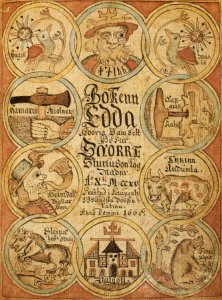 Now then, how do those inflections work in German language? I’m calling the following lesson plan The Case of the “The” by Erle Stanley Gaertner:

Before nano-processors in your pocket did all the memorizing for you, back in 1974, a fad whispered and died before anyone knew it existed — memorizing numbers for profit and fun. I wasn’t interested in fun and profit, nor in memorizing my mother-in-law’s phone number,  but I was interested in reading numbers. To cut to the rabbit hole, the concept piqued an interest that is still peaking..

Parlor tricks interest me less than basketball in a mad enough March.

Any of the way, it’s formally known as the Major System.

Bill, you major in minor interests don’t you?

You are correct, Sir. The more arcane and uninteresting the endeavor, the more profound my fascination.

Let’s say you have trouble remembering an all-important number — such as 42. 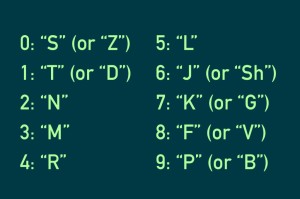 But what if you need to remember your towel and don’t have a word/number number/word dictionary at hand. Problemo No-o. W counts as a consonant in Arabic, but not in the language of System-Major.

Vowels are not explicitly expressed, so choose the consonantal combo that works for you.

Now turn your word-number/number-word dictionary upside down and look up the number 15. What have we there? What have we? 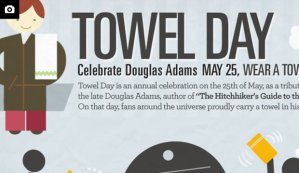 But Bill, does this have anything to do with German language?

Of course it does. When I taught German (a lot) it seemed important to invent a hokey-butt theory to explain similarities between German and English. My theory posits that the original Saxons, on their way to the British Isles, decided to celebrate their immigration by tweaking German into something that could become English. They did this en route. No one has ever reported this language-building event for the simple reason that none of it actually happened. 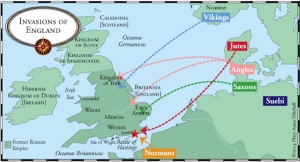 Are you trying to say something, Bill? You lost us in Calais.

Bill. We’re in the other room watching madness march, we can’t hear you. Titter, titter.

Let us look at another pair here: B to V.

Wer hat eine Frage? (Does anyone have a question?)

Could you close the door, Bill. We’re watching the game.

The time has come, the ziegler said, to speak of many things, or perhaps just about Teitsch and Deitsch.

Yiddish is a rendering of the German word Jewish — ‘Jüdisch‘.  This evening I took another look at it. A German might say ‘Such’ (but pronounce it ‘zook’) – ich suche einen neuen Look (I’m looking for a new look).

Where did you look, Bill? And, by the bye, we despise digression. And we’re easily unamused.

Among the less traveled crannies and nooks, under rocks or falling from trees. The usual haunts.

I’m the kind of person that spends moments thinking about the structure of German language — the gleanings of such squandered moments might help explain the resilience of languages based on German — things that Tiggers do best.

Here’s my tentative thesis: German is so god-awful complicated and rigid that it remains recognizable to the speaker of modern Deutsch, by dint of complexity.

So you posit that it is a durable language — rigorously so.

The Engländer spoke a form of German brought from Saxony (Sachsen), but the proverbial original German was jostled so thoroughly by the Vikings that all the inflections fell off.

Well at least I’ve anchored that reference to ‘things falling from trees.’

Do you speak Yiddish, Bill?

I can very easily understand the transliterated and the spoken Yiddish, i.e. without the Hebrew letters. It’s as familiar as Swedish or Dutch subtitles for a German film. In fact, Yiddish adopts German sounds and word order. Take a look and listen to the Omniglot site for a timely example. 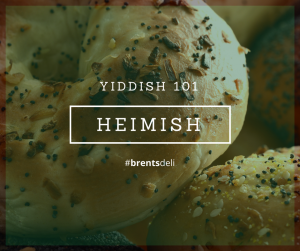 Profile of an Endangered Language

A word from our sponsor:

Beware the big lie, the humorless, the enforcer of arbitrary rules, the racist, maker of rules for jazz performers. In short, never underestimate the threat of fascism. Only 15% of its speakers survived the Holocaust. Of the surviving speakers 10% live in New York, many by way of Ellis Island.

Why doesn’t the current President of the United States ever laugh? Or is that a ludicrous question?

We now return you to our regularly scheduled program, in progress.

Do you speak Pennsylvania Deitsch, Bill?

Those immigrants from the 18th century brought their language of origin.  Deitsch is a spoken language with several transliterations to mime the sound. Yet, the structure, word order and vocabulary survive with amazing fidelity. Interesting stuff 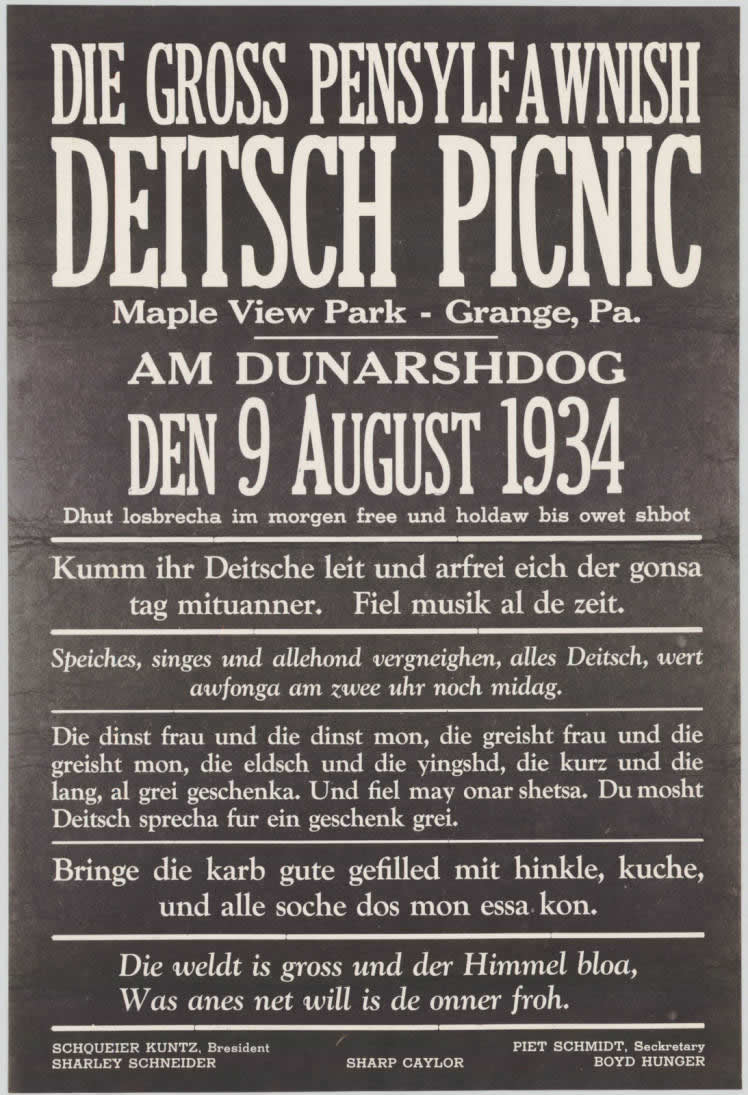 On a related topic, what kind of beach books do you read?

Here is an out-of-print volume that I found at a local library discard sale for 50 cents. 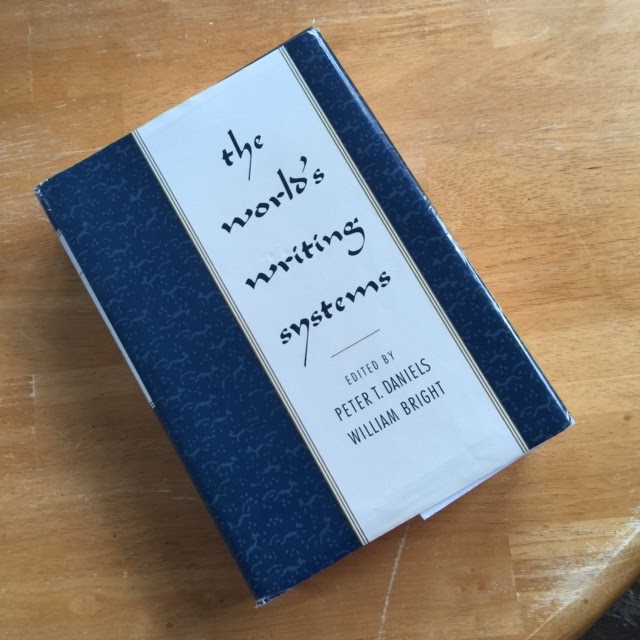 Here is that very book on archive.org