Breaking news from our time-traveling reporters, recently returned from a special assignment for The Genesis Tattler and World Report:

The 26th verse of the 1st chapter of Genesis (NIV) declares animal rights alienable, subservient to the inalienable rights of mankind (the ones created in His image and likeness). In a single sentence, a sentencing I say, the English translation describes

So farmed animals get exiled from wild animals in one fell swath.

Then God said, “Let us make mankind in our image, in our likeness, so that they may rule over the fish in the sea and the birds in the sky, over the livestock and all the wild animals, and over all the creatures that move along the ground.”

How about this logical leap: encaging every living being from tapeworm to giraffe between two commas — declaring the deed done in fewer than seven words. …Let us make mankind in our image

so that they may rule over…

I’m assigning another time-traveling team to the gates of Eden to report on the couple caught trafficking forbidden fruit: advice of a snake-oil-sales demon guised as a serpent, possibly a slitherer subservient (subserpient?) to the inalienably privileged pair. The devil is in the details.

Bill, if you don’t have anything good to say, don’t say anything at all.

It’s not really what I say that counts, it’s what I do. I DO VEGAN.

Speaking of saying something good, is it even possible to be a good person, to eat peas, live long and prosper? Not only to prosper, but to thrive without executing the calf and hardening the arteries, those tubes hat flow lifeblood into and out of your heart, possibly to head off an extinction event named after its instigator. While researching this article I happened upon a quite fascinating site that speaks to a potential extinction event : Misanthropocene 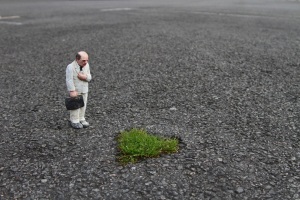 A few thoughts for future posts:

The hegemony of man as misogynist.

Where do humans fit on the scale running from sadism to masochism?

Are humans a selfish specie?

One self-adoring philosopher, Ayn Rand,  is my choice for single most influential human responsible for stoking the boilers of the Anthropocene Express. Git ‘er done, Ayn. Here is a Rand quote from 1974:

They (Native Americans) didn’t have any rights to the land, and there was no reason for anyone to grant them rights which they had not conceived and were not using. What was it that they were fighting for, when they opposed white men on this continent? For their wish to continue a primitive existence, their ‘right’ to keep part of the earth untouched, unused and not even as property, but just keep everybody out so that you will live practically like an animal, or a few caves above it. Any white person who brings the element of civilization has the right to take over this continent.

I sign off with the words of Anthony Douglas Williams:

The eyes have it.