Where a half-truth is a full-lie and a decimated truth is an epic.

The AIPAC Conference in Washington D.C. this week demonstrates that America is not only shoulder-to-shoulder in the ties that bind. America and Israel are shoulder-to-shoulder at both shoulders now. It’s beginning to resemble that iconic Brezhnev/Honecker image burned into my, and now your, memory.

Wealth is publicly flaunted in 2016. The party of the big tent is becoming the party of the wide wallet. Before AIPAC met I held slight hopes that despite Clinton’s roots in political dynasty and Realpolitik she might take note of Palestine on Monday. Not a hint. Without Bernie Sanders it is the party of little hope for 2017.

I wonder if the New York Times would reject my headline suggestion:

The Palestinian Authority directs attention from the sleight of hand played by Israel. Abbas is useful for diverting your eye from everyday ethnic cleansing.

The parties at the Oslo Accords of 1993 let pass a largely unknown legal restriction: requiring the labelling of goods manufactured in the West Bank, the occupied territories. A small negotiating point and legally binding, but the powers that be know the difference between de jure and de facto. Some negotiator did not recognize that BDS would happen.

The Gaza Strip is the most densely populated political unit on Earth. I wonder where the Palestinians now living in Gaza lived before they lived in Gaza?

It’s not a trick question. They lived in Palestine.

Here is where they used to live before the Nakba of 1948:

The rocks thrown by Palestinian youth are Made in the USA: created with weapons of modern technology. On July 12, 2014 Israelis showed up with lawn chairs (and a sofa) to witness rock manufacturing.

Bonus dollars for the military-industrial complex: an exploded bomb no longer exists after the explosion and must be replaced by an unexploded bomb. The destroyed homes are not replaced. But if they are replaced bombs are available to destroy them again.

Operation Protective Edge was just the most recent of many catastrophic assaults on Gaza. Meanwhile, Israel’s Justice System imprisons 12-year-old rock throwers. Death by sniper on Palestinians of any age thought to hold a knife. Actual knife-wielding/rock throwing optional.

The common response in the USA: shrug that shoulder.

Another lucrative industry for Israel: prisons. It’s where 12-year-olds are sent for throwing rocks, where they are housed. During a daily patrol IDF soldiers follow “suspected” youth to their homes. They enter homes at will and locate the suspect’s bedroom. At 2:00 in the morning a knock comes on the bedroom door. Bedwetting is common. I wonder why.

Maybe we can look to the Ministry of Justice in Israel for justice, so let’s check there. Ayelet Shaked is Justice Minister. 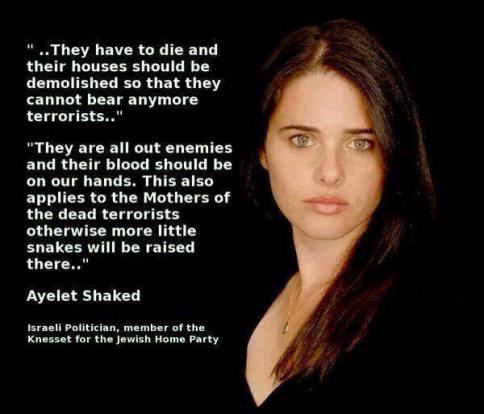 What good may a boycott bring? It can expose human rights violations otherwise ignored. Many members of academia are joining together, bringing attention to a little-known school via a boycott.  This past Monday (14 March 2016) a thousand protesting professors announced their stand on Ariel University

In all fairness though I am providing an opposing viewpoint for your convenience,  Anne’s Opinions: a WordPress site that explains every Israeli human rights abuse as somehow explicable. See if Anne adopts a certain insular perspective.

Does Anne know that her society lives and thrives on Palestinian soil? Is Ariel a university of Israel? Or is it another foothold in Occupied Palestine? Does it benefit Palestine or does it serve the 500,000 settlers on occupied land?

Anne’s blog post on the Ariel action: Let’s see you boycott this, idiots.

Just for the record, Ariel University is not in Israel.

Here is a different perspective on Ariel:

The list of reasons for this BDS action: Israeli Academics for Peace.

BDS Movement Full List: here is an up-to-date and handy reference to the players: who they are, where they are and why they matter. Their game is gaining your participation through witting or unwitting complicity.

BDS Marin: here is one of the many local groups thinking global. The list above does not include Nestle among boycotted products but this Marin County movement does include them. So it’s good to cross compare.

BDS Movement on Twitter: here is another social media avenue for learning, teaching or contributing.  I’ve just received an article that delves into the HP security matrix. Life is an ongoing dystopia for Palestinians. HP has really earned it’s place on the BDS list. I’m looking into their other products but do not want to make it overly complex, or less focussed, at this moment.

Please feel free to contact me (ziegler.bill@gmail.com) or leave a comment on this post. Truth and accuracy are important, let me know if something isn’t correct. Participation is vital.

Yesterday I attended a screening of Ghost Town – The Story of Hebron. A well attended event successfully delivered by the Cincinnati Palestine Solidarity Coalition. A fellow supporter of the Palestinian cause noted that I had a bottle of Tradewinds Tea in front of me. Nestle, a Swiss company of notable size, owns Tradewinds: they have plants in the West Bank.

We are presently working on a locally based BDS Movement for the Cincinnati area. Look for us at local businesses that unknowingly contribute to the massive human rights violations in territories occupied by Israel since 1967: the Naksa.

I was a sophomore at the University of Cincinnati at the time of the Six Day War, working on my B.A. in Geography: it was a subject topic in Human Geography that became the stuff of current events in the classroom. In 1971 I completed my M.A. in the same field at Kansas State University. I was born 8 months before the Nakba, so my personal hallmarks coincide in memory with the hallmarks of Palestine these 68 years now. A difference: I have never been a refugee but 6 million Palestinians from Palestine still are. BDS helps everyone.

No time is a good time to support an Apartheid state. I am personally complicit in supporting Apartheid by continuing my American citizenship. Rather than renouncing my home land I am at this moment exercising First Amendment rights, rights that are not available in the State of Israel. Lucas Koerner learned firsthand what may occur if you stand on a public square in Jerusalem. No one should feel discomfort at taking a stand, whether by #StandWithIsrael or #StandWithPalestine.

The First Amendment is one resilient set of words. I like its resonance. It’s available to the most marginalized people. Majority rule makes the world safe for the already comfortable. The Tyranny of the majority (dated 23 February) seeks to restrict basic human rights that already belong to the marginalized, on those less powerful. Just keep repeating this lie: “Majority Rules” from the playground to adulthood and you’ll think it’s truth.

Meanwhile, in this age of one dollar one vote you can still use the dollars at your discretion to cast a BDS vote.See you in the marketplace.