Nothing melts my heart so thoroughly as receiving a kind letter from a favorite author. 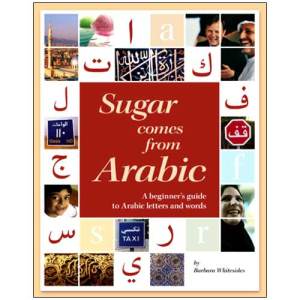 Recently, I suggested, kind readers, that you visit a link to a valuable resource. To a book that inspired me to learn Arabic well — Sugar comes from Arabic by Barbara Whitesides. It is as sweet as Arabic coffee. I encourage you to obtain a copy as early as humanely possible.

Select a tea or Arabic coffee and get ready to savor marvelous things. Fetch a writing instrument and some lined paper, or the back of an envelope. The book is comfortable to the eagerly flipping hand. Very often overlooked by lesser binders — it has a freely moving ring-binder format. Lay it open, lay it to one page. It doesn’t fall to the floor. It doesn’t require paper weights — a very important feature in a language book!

Discover a world where mere writing takes on the freedom and skill of the gymnast. A language a world away from the 26 offerings of the English you are reading now.  Latin letters of Roman device (Latin Alphabet A-Z).

Did you know that a proper Latin alphabet possesses not the merest of minuscules? Have you observed that curved lines are quite literally ANATHEMA to the words of Latin? Writing with ALL CAPS connotes shouting in the language Troll.

Somehow I feel it likely that you are reading this while attached to the internet.

Might you have read this far, I admire your patience. Perhaps you’ve only now viewed this olde bloge o’ mine. I thank you for reading, and I’ll thank you again at the end of this post.

Roman numerals are now seen at the opening frames of older films, e.g. MCMIX (quite a number of famous Hollywood releases in 1939 (to have already given away conversion of MCMIX). The only other use is to promote a bowl of befouled fowl body parts in the cold cave of early February.

Proceed you now to several pages:

Mnemonics aids learning, it’s one way to hold onto fragile new knowledge while it attempts to land safely and securely in long-term memory.

Here I am quoting myself in a letter to Barbara —

Your kind letter has made my year 🙂 Thank you so much for reading my article. You never know just how far your words can travel.
I am writing a series on my discoveries in Arabic and I want to share how much Sugar Comes from Arabic helped me overcome the daunting challenge that mastering its script represented. Now I find myself enthralled by each encounter — from the unexpected thrill of gently pulling the pen along the paper rather than plowing into the paper, then immediately covering it up in the “normal” way that my left-handedness dictates in left-to-right English.
I taught German for many years and know how limited and mundane many methodologies simply are. Bringing language alive doesn’t just happen. My introduction to Arabic began with one of my Palestinian students. I still have the slip of paper that became my introduction. Finding your book was the next discovery that piqued my interest and resolve to keep at it.
Well it seems that I am already writing the next in that series of Arabic discoveries by composing this reply. So I return to the SaFaRi into the desert that is the blank page — a SaHaRa 🙂

Let’s check out another page:

Here’s a rhetorical question: Why do so many books on Arabic use small and grainy fonts?

Arabic script is a joy. Barbara Whitesides’ book is both beautiful and inspiring.

Many posts ago a Palestinian pal (“pal” is twitterese for Palestinian) asked me to write about my adventures in Arabic. So here ’tis 🙂 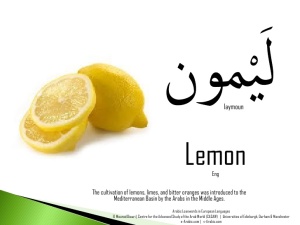 This pal o’ mine is a refugee of Nakba 1948. By various twists of synchronicity he found his way to one of my German classes, intent on reading a bit of the curious language.

A capital stroke of good fortune — a safari if you will. And so did it begin. I said “look my friend, if you are willing to learn some German I could at least learn some Arabic.”

Arabic script is daunting at first. I compare its foundation in the arts and sciences to the Roman alphabet: Arabic script is to the Latin alphabet what Arabic numerals are to Roman numerals.

Take a Roman number. Calculate its root. Let’s take the most important number of all time 42 (XLII). Let me know when you have an answer. Show all work.

Nevertheless, Roman civil engineers achieved the splendor of the arch and its keystone cap.

I bet you didn’t know Farsi from Arabic at first.

That is actually correct. I looked at Persian and thought the pairing would be simple — like switching to Dutch from German. Well, a well of Arabic words exist  in Farsi, but Farsi is not based on the root system, a method residing at the very foundation of Arabic. It’s closer to English that way. Rootless.

Consonants that appear in a certain order to suggest meaning. The word ‘safari‘ has roots od SFR. Place some prefixes, suffixes and a few vowel sounds here and there. You’ll discover vocabulary treasures relating to ‘travel’ one way or another.

Why did your pal bleed from the ears?

Not just my friend — most of my students. Encounters with German involve a crazy  grammar that most German students to long for escape (The Great Escape). Though toddlers who drop every dread adjective ending perfectly every day — imagine tossing a deck of cards into the air and thinking them into well sequenced suits.

Look for a taa marbuta at the end of a noun — it’s that smiley face you see to the right, it’s easy to recognize too.

Arabic nouns are never neuter. There is no “it.” Just masculine and feminine. Wowser, that’s a 50% increase, from 2 to 3. There is no verb “to be” in the present, though there is a “was” in Arabic. The verb “to have” does not exist in the way of “haben” or “have” or “habeo.” Habemus Papam.

Did you know that it’s almost impossible to say anything in German without knowinf a noun’s gender?

Only a small exaggeration.

Herr Ziegler, can you craft a short sentence containing all four cases for us?

Let me grapple that in another post.  Gellerese anyone?