A good friend brought this opinion by Seymour D. Reich to my attention today.

Bernie Sanders did not say many words (measured rhetoric) on a theme of the “disproportionate force” but each word has sprung multiple leaks.

Media in the US and in Israel form the corpus politic. Tangential reporting relies on short attention spans in the audience, a single word must never gain purchase. Hasbara is serious business.

“For decades, most American Jews who cared about Israel’s welfare and security adhered to the maxim that we don’t voice criticism of Israel in public.”

Source: Israel’s Assault On Democracy: Time To Speak Out | The Jewish Week

Bernstein is a frequent contributor to the WP and has performed his perfunctory best at pressing the “hate site” label onto Philip Weiss, half of the Mondoweiss founders. Philip keeps getting into Mr. Bernstein’s craw and it’s hard to remain level-headed when your craw is aching. I understand.

See also “antisemitism” and “anti-defamation” to learn less of the truth about Palestine and the Palestinian people, as refugees under occupation, as a people in exile for 68 years now.

I admit this: I am a comment reader, an observer of scary stuff that goes on in the worlds of Israel and her BFF. It festers as ever: Israel as promised land (“Because He promised. I swear He did”) Honey, milk, physical and spiritual perfection. A place where birthright yields more independence and recognition than birthplace.

The whole construct relies upon holding fast to denial: the perfected society has skeletons in its closet (carpentered in 1948). PTSD is not unknown among IDF soldiers and veterans. They are breaking their silence.

Witness storied operations inspired by the sling of David, but remain unaware of the murderous occupation maintained for cleansing ethnicity.

Let’s say that your guess is as good as mine. 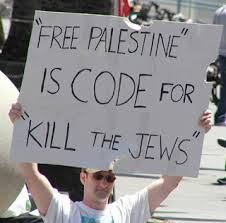 Similarly, a Twitter page for those wishing to band together and fight Arabic fascism.