Personal integrity requires living ethically. Climate change threatens the livability of this planet for countless species. Veganism is not Shmeeganism.

Pete Seeger let us know where we stand politically! I call it a metaphor for this election year and a perspective from the Smothers Brothers Show in 1967. I had a Pat Paulsen bumper sticker on my ’63 Corvair in 1968.

Waist deep in the Big Muddy!

And the big fool says to push on!

Veganism is still a minority constituent of the body politic. But it’s good idea to stand on the side of truth.

Throwing a snowball on the Senate floor is as helpful for understanding the significance of two (2) Celsius degrees as an answer from genesis by ken ham.

Meanwhile Steve Inskeep throws softballs on NPR. Disclosure: Inskeep has been in my craw since replacing the inimitable Bob Edwards on Morning Edition. Just saying.

Gross is our domestic product. Strength is our ignorance.

I sit on a man’s back, choking him, and making him carry me, and yet assure myself and others that I am very sorry for him and wish to ease his lot by any means possible, except getting off his back.

Leo Tolstoy had his pulse on humanity. Select anything he wrote and discover splendid presence and prescience, including veganism and anarchism. Quotes

The Long Failure of Western Arms

Yes. If it’s a good idea Tolstoy wrote about it from 1828 to 1910. He stopped writing by dint of death: a century plus six years.

E.F. Schumacher offered the planet some important advice in 1973, roundly and soundly dismissed at the time, but I sense a resurgence, at least a spirit of hope.

From Globalisation for the Common Good Initiative, a perspective on E.F. 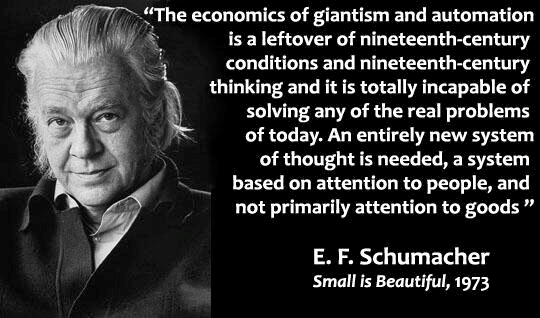